Recently my husband and his three grown daughters found themselves in St. Louis for the funeral of Michael's brother, David. The girls' beloved Uncle David was a much-respected theologian and professor, as well as a fine musician.  David played tuba in a symphony, and in the last decade of his life created the Clyde Pickens bluegrass band, named for his father Clyde and the county where he grew up, Pickens, South Carolina. David was 79-years-old when he died and we can all agree that living to the ripe old age of nearly 80 years is yet another accomplishment in a life well-lived.  A funeral is never a pleasant event,  but, as funerals often do, it brought together many far-flung members of a family, and a surprise reunion for Michael and his beloved daughters.
No one in the group knew much about St. Louis, but Michael recalled that Tennessee Williams was buried there. Somewhere. The beautiful daughters agreed that finding the grave of America's greatest playwright was a perfect way to spend a sunny day in St. Louis. Out came the phones and consultations with Siri, the magical know-it-all who speaks from within the portable phones of the techno-savvy.
This Siri business is quite remarkable to Michael, a guy who refuses to even consider the convenience of carrying a cell phone himself. Instead, he suggests that I recruit Siri on my cell phone and share the convenience with him. This is a real bone of contention in our marriage.  Don't get me started . . .
In his book, "Memoirs" Tennessee Williams says he'd specified in his will that he wanted to be cremated and buried at sea in the Gulf of Mexico near the probable location of the bones of Hart Crane. Crane was a favorite poet of Williams who died young (32) by jumping to his death from a boat sailing between Mexico and New York.  Crane took his own life on a day after he'd made sexual advances to a sailor on the boat.  The sailor was offended and beat the poet badly.  This sort of thing happened often enough to Williams, too, and he, no doubt, understood the shame related to being homosexual. But instead of jumping ship, as his favorite poet did, metaphorically that is, Williams saw the voyage through. He persevered, he wrote plays and more plays, and in 1944, "The Glass Menagerie" met with huge acclaim. He was 33-years-old. Overnight the lonely and depressive unknown playwright found fame and fortune. He entered the world of the famous and lived out his life plagued by what he called "the tragedy of success."
Tennessee Williams had an older sister, Rose, and a younger brother, Dakin.  Rose was lobotomized in 1937, when lobotomy was used to treat mental illness. She was dependent on full-time care, financed by Tennessee, for the remainder of her life. Dakin, who was 8 years younger, was an attorney who came to his infamous brother's aid in 1969, by having him hospitalized for alcoholism in St. Louis. Dakin also had Tennessee christened in St. Mary's Star of the Sea Catholic Church in Key West, as repentance for his sins of blatant homosexuality and generally debauched lifestyle.  Dakin loved the name of the church and Tennessee thought it a great title for a play.
After Tennessee's death Dakin claimed that the playwright had been murdered. The hows and whys of this intrigue were never quite clear, but Dakin traveled with bodyguards when he attended New Orleans' annual Tennessee Williams Festival, celebrated around the March 26 birthdate of Tennessee Williams. And Dakin always enjoyed being the last link to understanding the playwright's life. He relished the role and claimed himself to be a  "professional brother."  Toward the end of his life Dakin created a bizarre one-man show in which he dressed in drag to portray Blanche Dubois. The show went through various versions, but always ended with the final speech from "Glass Menagerie."
In spite of Tennessee's stated wishes, upon his death Dakin had his brother's body transported from New York City to St. Louis, Missouri. There the body laid in state for two days and was buried in Calvary Catholic Cemetery. Tennessee's body lies eternally next to his mother, Edwina, and his sister, Rose.  When questioned on the matter, Dakin claimed that his brother's will contained no provision for a burial at sea. He added that he would have ignored it if it had.
"Tennessee is such a literary personality that his grave should be where people can visit it," Dakin said. "They would have a hard time finding his ashes in the ocean."
And so, on an unseasonably warm and sunny St. Louis afternoon, the group set out to find the graves of Tennessee Williams and his invalid sister Rose.  Both had once lived on the island of Key West in the not so distant past, a past that seems ever more hazy as this world speeds into a future where the genius of Tennessee Williams sometimes seems all but forgotten. 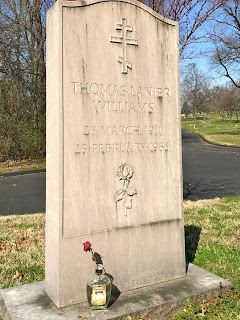 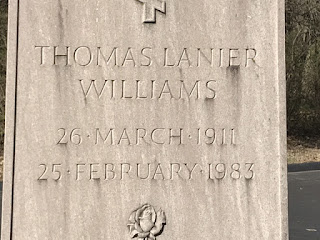 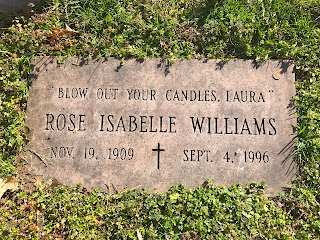 And Dakin? He's there too, with Tennessee, Rose, and their mother Edwina.  But there are no words carved into a stone for Dakin, no way of knowing which grave is his. When you enter the Calvary Cemetery and they give you a map with red circles around the more notable denizens, Dakin's grave is not among them.  Why isn't Dakin's gravestone marked? Who can tell us? Maybe someone should ask Siri.
Posted by June Keith at 2:20 PM 5 comments