It's a rare day when we are not asked for directions to the Hemingway House, located just around the corner. The path to Key West's number one tourist attraction is worn quite smooth.You would think the location of the town's most famous writer would be anything but a mystery, and yet, nearly every time I exit my home I am approached by people who ask in tentative tones, "Is this the way to the Hemingway House?"
I was once hired to write a brochure for an English painter named Patricia Townsend who moonlighted as a tour guide at the Hemingway House. I invited her over for dinner, at which time I hoped to get to know her better.
"Can you come at six?" I asked.
"Yes, if the damned tourists don't keep me late asking ridiculous questions about the great Hemingway," she said scornfully.
"What kinds of questions?" I asked.
"Obnoxious ones. They want to know: 'Is this where he shot himself?' and 'Is this where he went to the bathroom?' They're disgusting! "
"So we'll see you around six?" I asked. 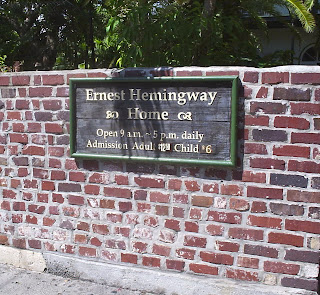 "Yes. All right. But tell me, what do you eat? No meat, I hope."
"No," I assured her. "No meat. I'll fix pasta."
"With tomato sauce?" she asked. (She pronounced it toe-maaa-toe.)
"Yes, and lots of garlic," I said. "We love garlic. It discourages the mosquitoes."
"Oh, I can't have garlic! It will carry on my breath when I give tours to the Hemingway fans," she said.
"Fine. No garlic," I said.
"You don't have any animals do you?" she asked.
"No." I said.
"Because I hate the way you Americans go on about your house pets. People go mad for those mangy Hemingway cats. They pick them up and kiss their little faces! I find it utterly appalling!"
"No animals," I said. "But we do have a little boy. Do you like children?"
"Ab-hooooooor them," she said, turning her head as if avoiding a bad smell.
"Oh, I see. Well, perhaps we'd better postpone this visit until my son grows up and moves out," I said.
In fact, I never did write that brochure. And Townsend, who'd hoped to find happiness and artistic success in Key West, was ultimately very disappointed. Her next move was to Indiana, and that's where she died.
Townsend and her eccentric personality was much appreciated by my great friend, the late Richard Heyman, who owned the Gingerbread Square Gallery in those days. He was charmed by her painting, although, sadly, Richard's enthusiasm was not shared by people who bought art. Our wedding gift from Richard was a Townsend painting entitled "Avocados for Breakfast."
The heavy bough of a particularly productive avocado tree hangs in our neighbor's yard. We imagine there was a time when Hemingway noshed on these beauties. Of course we do, too.
At avocado time, which is now, we eat lots of avocados. We cut them in half. Remove the seed. Fill with oil and vinegar salad dressing. The Cubans make a salad with avocado chunks, onion slices, and oil and vinegar. Yum. And when we eat our avocados, we prop up Townsend's painting, which we love, on the table, before us. We display it in the kitchen, always, and in the 25 years it has been with us, I'm afraid it has suffered through more than a few splatters of one thing or another. Nonetheless, we feel it belongs in the kitchen.
I'm sure Townsend would ab-hooooor that.

Email ThisBlogThis!Share to TwitterShare to FacebookShare to Pinterest
Labels: I was

The Fine Art of Being Marion

Does anyone remember Marion Stevens, founder of the art gallery, “Artists Unlimited,” and heroine of a hundred crazy stories of old timey Key West? There’s a story of her chasing her naked husband, the artist Paul Stevens, down the middle of Duval Street, screaming and waving a knife over her head in the infamous wee hours on one otherwise quiet night. Marion, who arrived on the island in the late ‘50s, loved Haiti, Haitian art and Haitian men. She vacationed there often and chummed around this island, and Haiti, with the gruff and ever adventurous Margaret Foresman, editor of the Key West Citizen.  She sipped martinis at Delmonico’s on hot afternoons. She stormed the mayor’s office whenever her civic dander was up and addressed the Key West City Commission with such conviction she appeared to many to be mad. And maybe she was. She was very, very creative, using her body language, as much as her words, to get her sharp points across.
And when she was older, and no longer running a gallery, or chasing her lovers through the streets, she rode her bike around and around the streets of Old Town. She wore elegant white shirts, capris, huge sunglasses, and sandals, her head high, like the dancer she’d once been.
So who was Marion Stevens and how does she fit into Key West’s history, legend and lore? Finding the answers to those questions, and turning that information into a stageable narrative, is the job these days of playwright Toby Armour. Armour has been commissioned to pull together all the stories and fables and create a play for the purpose — according to the grant underwriting the project — of “capturing the heroic and colorful people who made Key West the unique place that it is.” Armour, a playwright of considerable insight, has had many of her works performed. (I Googled her. She’s the real thing.)
Through research and conversations with people who have known, in one way or another, the eccentric gallery mistress Marion Stevens, Armour is fashioning a character based on a person she never met. There are quite a few of us left on the island who did know Marion, apparently, and the project has become both monumental and fascinating to the handsome and articulate playwright.
Armour told me she’d learned that Stevens studied dance in Germany in the 1930’s with the renowned Mary Wigman, the mother of expressive dance. Among Wigman’s students were Martha Graham and Isadora Duncan. Armour is frustrated that the trail of Stevens in Germany has gone cold. All Stevens ever said about Germany, and this to her sole surviving niece, is, “I got out.” Provocative, eh?
The Key West Fringe, formerly called the People’s Theater of Key West, has as their motto: “Key West is our theatre.” Their presentations go on at the Key West Women’s Club, 319 Duval Street, just a block south of Steven’s Artist’s Unlimited Gallery, which stood at 221 Duval. Their next production, "Dinner," by Moira Buffini, opens February 24. Go to keystix.org for tickets. The play, "Tennessee Williams @100," scheduled for August, 2012, is already sold out. No date has yet been set for the premiere of the play about Marion Stevens, still under construction.
If you have something to contribute to the Marion Stevens saga, Toby Armour would like to hear from you. Her address: tobyarmour@msn.com. In the meantime, stay true, stay real, be memorable. One day the play being staged by the Key West Fringe may be all about you.
Posted by June Keith at 5:48 PM 1 comments

The Eye of the Beholder

According to CoedMagazine.com, Key West is at the top of the list of trashiest Spring Break destinations. This certainly doesn’t sit well with people like Andy Newman, spokesman for the Florida Keys Tourism Bureau. Trashy is not a nice way to describe a paradise on earth like Key West.  Key West, with its exorbitant hotel rates and many pristine and romantic hideaways is anything but trashy, Andy says. Turns out, Andy misunderstood. No insult intended! Trashy is a good thing!
“This is a double thumbs up,” said editor Neal Lynch, of CoEd.com. “It’s definitely a seal of approval....Our goal is to redefine the word trashy.”
Did you hear that? Redefine the word trashy? This is not gonzo journalism. This is journalism gone. I would go wherever this guy tells me not to go.
Last month another journalist somewhere created a list of America’s Gayest Cities. Of 15 cities selected, Salt Lake City was number one. Key West was not even mentioned.  A guy at work, seeing the story on the front page of the Citizen that day, took offense.
“Hey!” he said. “How can Key West not be on this list?  This is wrong!”
The guy questioning the story is not gay, as far as I know. It really doesn't matter. He was thinking of our many gay friends and coworkers, our fellow Key Westers. How would they feel to be left out of this story?    I’ve noticed in Key West it’s like that trailer park tee shirt warning: “F--- with me and you F--- with this whole trailer park.” One of us has the power of all of us. United we stand. Divided we go to tea dance.
Ultimately I see that it’s a good thing not to be on this list. I mean think about it: would you rather be gay in Key West or in Salt Lake City?

The Survivors Who Lunch