Vidal Sassoon, the haircare guru who forever changed the way women wear their hair, has died. He was 84 and I consider that to be a very nice length of lifetime, right?   Anyone today working in the business of hair — cutting it, styling it, washing it or blow-drying it, owes a debt of gratitude to the guy who freed us all from rollers and old-fashioned space helmet-like hair dryers that kept our mothers captive for many long, hot Saturday afternoons.
Praise for Sassoon’s genius is piling up like hair under a busy barber’s chair. Tabitha Coffey, the star of the Bravo reality show Tabitha Takes Over tweeted that her day had been ruined by the news of Sassoon’s death. Madison Avenue salon owner and celebrity stylist Oscar Blandi said Sassoon showed him the “true art of styling” and made him fall in love with the hair business.
I knew a guy who fell out of love with the hair business thanks to Vidal Sassoon. He was Richard Heyman, who owned the Gingerbread Square Gallery here in Key West. Way before Richard found his way to the Southernmost Point, he made a small, but impressive enough fortune in the hair business. Mr. Richard’s Salons occupied several storefronts in Toledo, Ohio. Each salon employed a busy staff of hairdressers. It was the mid-'60s and respectable women, of which there were plenty in Toledo according to Richard, dutifully maintained their hair with unerring dedication to tradition, just like their mothers had.
Richard Heyman was enjoying great success in the hair business when the innovative Vidal Sassoon splashed onto the scene. Sassoon was English, and in those days London was the trendsetting capital of the world with icons like Twiggy, Mary Quant, the Beatles, the Rolling Stones, all topping their brilliant, arty heads, with no-nonsense precision cuts ala Vidal Sassoon.  Richard packed off for London, and studied with Sassoon himself. And because Richard never did anything half way, he learned to do a flawless Sassoon cut, just like they did in London. Richard brought London style back to Toledo, and his customers loved him for it. Sassoon’s wash and wear cut was all the rage. And Mr. Richard’s Salons became the trendsetting place to go for mod hair.
But Sassoon’s innovations turned out to be not so good for Richard’s business.
Before Sassoon, the hair routine in Toledo went like this: once or twice a week women would visit the beauty parlor for a wash, set and comb out. This holy trinity of hair care could be administered to as many as 25 customers in a day. It was done assembly line style. First the shampoo girl shampooed. Then the hairdresser put the hair in rollers. Then, a turn in the hair dryer, with its strange, hot, ear-roasting solitude. Finally, back to the hairdresser for the comb out. Hair was teased, sprayed and shellacked into place, where it stayed put until the next visit.
The Sassoon haircut changed everything. It was possible, before Sassoon, to fluff  (Richard’s word) a whole neighborhood of women in one busy salon day. But the Sassoon haircut, with its careful symmetry, demanded time. No rollers, no dryers, no hairspray or shellack needed. Further, one good precision cut haircut could keep a woman out of the beauty salon for weeks at a time.
Richard’s beauty parlors went from being money making wash, set and comb-out factories to leisurely salons, where hair stylists in mini-skirts and 5-point hair cuts lavished their progressive customers with refreshments, conversations and picture books of Sassoon-inspired hair designs, and carefully calculated each woman’s leap into the trendy world of the sexually revolutionary '60s. (Morning hair that tossed right back into place after a wild night in bed made the one-night stand far more practical.) Mr. Richard’s business foundered. And since Richard Heyman enjoyed nothing less than bustling success, he grew restless, sold his hair care empire, and moved to Miami to consider his next move.
Richard came to Key West, where he founded the Gingerbread Square Gallery. He loved the island city and dedicated himself to making Key West the best place it could be. He got into local politics. And then another ground-breaking move: he was elected America’s first openly gay mayor. Revolutionary. I worked for Mayor Heyman for four years, and learned from him important lessons that put me on the path to a very happy life.
So today I’m thinking I, too, owe a debt of gratitude to Mr. Sassoon, not just for freeing my mother and me from the tyranny of rollers and hairspray, but also for sending to Key West Richard Heyman, a man who changed my life with his spirit of fun, of fair play, of enthusiasm. RIP Vidal Sassoon. And RIP sweet Richard. May you party on in Hair Heaven.
Posted by June Keith at 1:05 PM 1 comments 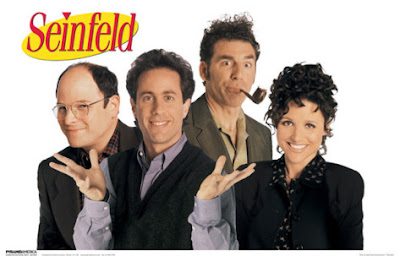 Here in Key West Seinfeld is on from 11 to midnight, two episodes, every night. A while back, when I was ill, I got into the habit of falling asleep to Seinfeld. It was therapeutic listening to those familiar voices, reminding me of the absurdity of the world in which I so wanted to stay. Now that I’m healthy again, I still do bedtime Seinfeld reruns again and again. I could probably recite verbatim most Seinfeld scripts, just as I can sing the score from West Side Story from memory. Really. 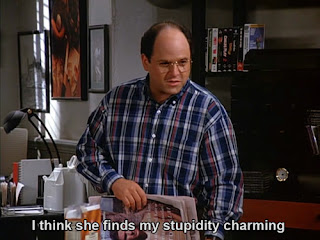 For many years I worked Thursday nights -- Seinfeld night -- and only heard the talk about this new, very funny television show called Seinfeld. I was a late comer, but once I found the show, I couldn’t get enough of Jerry and Elaine and George and Kramer. Those characters are authentic. I knew these people when I lived in New York! George’s father -- that guy was my father, the quintessential, short, grumpy New York dad. They even look alike.
When I hosted the locally produced television show MD TV, we chose to come on right before Seinfeld. MD TV was on for 8 years. We were on long after Seinfeld had hung it up. The key to our success: that lucky time slot of 7:30, Thursdays, right before Seinfeld. 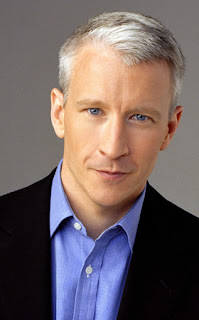 I’ve heard he’s gay -- not that there’s anything wrong with that. I love Anderson Cooper’s brand of journalism, but also his wry sense of humor, which he exposes far more often in his morning talk show than on his serious nighttime news show. Cooper is an American institution, a Vanderbilt heir, who could be hanging out, doing nothing but looking real good, with Paris Hilton and the other famous for nothing celebs. But no. Anderson has character and ambition. He has earned his fame, fair and square.
His mother, Gloria Vanderbilt, to whom he shows utter adoration when she appears on the show, designs fabulous jeans. Gloria has led a poor little rich girl fairy tale life, with fantastic highs and horrific lows. How could her son Anderson be anything other than amazing?
Anderson and I share a passion for dulce de leche ice cream. His talk show is at 9 a.m., opposite Rachel Ray, a show I used to like, but now turn to only when Anderson’s show is too real, like when he interviews murderers or dog trainers. Rachel is charming, sure, but when she lists ingredients for her daily recipe, she seems to think we all live just down the block from Balducci’s. 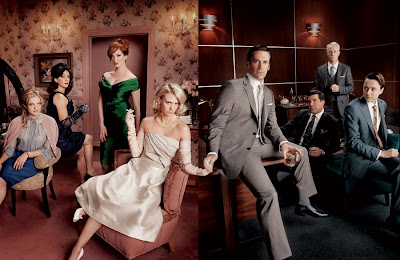 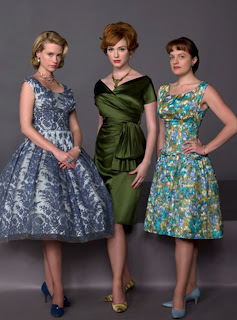 Ah, New York in the '60s. I remember clearly that smoky train ride between Grand Central Station and Katonah. I might have chatted with Don Draper on that train ride that he, an advertising executive and I, a student at the Fashion Institute of Technology, so frequently rode. We’d have flirted and shared a beer and many cigarettes, and we may well have taken that relationship a step or two further, because that’s how we behaved in the '60s. And yet at the time, just like the people on Mad Men, I wasn’t having much fun, doing what everybody was doing. I recall a pervasive misery, an aching sense of not fitting in. I saw a terrible reality gap between what my parents believed and demonstrated to me in the way they were living their lives, and the way people around me, and at my school in New York City, were living theirs, breaking all tradition, being free, outrageous and, well, shameless. I’d seen what shame could do so I wanted the opposite. I was 17 when I met a man and woman who unabashedly told me they were living together. In sin! I was certain that merely sitting at the same table with them would guarantee me a place in Hell.
There’s a real sense of darkness around that show. It’s in the music, the endless smoking and drinking and sly sexing and moping children. Each week I wonder, who is the guy toppling off the top of the building? It really could be any one of them. In the '60s, it could have been me.