Sexual Abuse: Shame and what I wore 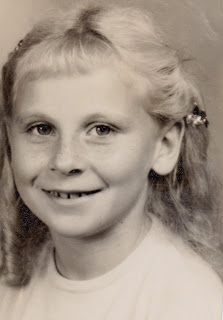 Do you remember the first time you were sexually abused? I do. I was in the fifth grade, at a ballroom dance class. I loved that class. The girls dressed in Sunday-best dresses, white anklets and patent leather shoes. The boys wore ties and sports jackets. Mr. Richards taught the basics of ballroom dancing, the box step, the fox trot, and then, my favorite, the cha cha. The class assembled in a circle in the gym, and every few minutes the music would stop and the boys would move on to the next girl in the circle. That way, everyone spent a few minutes ballroom dancing with everyone else.

One day my dance partner was Kenny Brown, a kid who was in the sixth grade but should have been in the seventh. He'd stayed back a grade and was older and bigger than the rest of us. We got into position,  Kenny's right hand on my back, his left hand in mine, and began following Mr. Richard's instructions.  But then Kenny moved his hand from around my back to my front. He rubbed circles on my chest, in the place where my breasts would eventually be, but were not yet.  There was nothing there but bone and ribs. This did not deter Kenny.

Stunned, I pretended not to know what was happening. I looked at Kenny's face for some sign of recognition from him, an explanation of what was going on.  Was I imagining this? Would he burst out laughing? No. I watched Kenny's eyes busily scanning the room, over the top of my head, darting from Mr. Richards to the couples around us, making sure no one saw what was he was doing.  No one did. Then Mr. Richards announced it was time to change partners and Kenny moved on to the next girl in the circle.

I did not tell anyone, but shame dogged me for weeks. I searched my mind a thousand ways, trying to understand my part in the thing, and even wondering whether or not it had truly happened.  I'd looked forward to the afternoons when my mom helped me get ready for dance class, made me as pretty as I could be. But then I felt guilt at making myself so pretty that Kenny had taken it as an invitation to run his hand all over my chest.

What haunted me the most throughout those two weeks until the next dance class was the thought of what I would do or say the next time Kenny was my dance partner. I dreaded that moment every night before I went to sleep. I thought of it when I woke up. I thought about it in school. I considered quitting dance class, but I knew if I did my parents would demand to know why. I had no idea how to tell them.  I feared they wouldn't believe me, or, if they did, I was afraid my father, who was Italian and a bit rougher than most other fathers I knew, would go after Kenny's father and there would be trouble. The last thing in the world I wanted to do was to make trouble.

Kenny Brown never came to dance class again. I figured he'd quit. Or maybe he had fondled another girl with far more self-esteem than I, and she'd told her parents.

This all happened more than 50 years ago! Still I recall distinctly the moment when Kenny Brown robbed me of the girlish pleasure of being pretty in a pink party dress, and replaced that sunny innocence with shame. The memory still has the power to make me cry.

Today, as the dark subject of sexual bullying has become front and center in this shameful and bleak political season that is the presidential race, I am remembering how much that first episode of sexual bullying -- yes, first, there were more to come as my life went on -- hurt me and even changed my feelings about myself, as well as my sense of who I was in relation to boys and men.

Yesterday I took a survey.  I asked every woman I saw: "Do you remember the first time you were sexually abused?" Their responses were nearly the same, every time I asked.  First surprise at the question. Then reflection. Then the answer.

"Did you tell anyone?" I asked.

"Why didn't you tell someone?" I asked.

"Because I thought no one would believe me."
Posted by June Keith at 2:01 PM 3 comments